The Vietnam Film Institute in Hanoi (with a sub-archive in Ho Chi Minh City) and the European Foundation Joris Ivens decided to strengthen their relationship. On March 11th Mr. Adrian Spijker, ambassador of the Ivens Foundation, visited the Vietnam Film Institute, and Mr. Dao Quoc Hung, director of this national film archive, will visit the Ivens archives in return in June. The purpose of this project is to deepen the research on the four Vietnam-films Ivens made during the second half of the 1960's: Le ciel, la terre (1966), Loin de Vietnam (1967, with Godard, Lelouch, Klein, Varda a.o.), Le dix-septieme parallele (1968, with Marceline Loridan-Ivens) and Recontre avec le président Ho Chi Minch (1970) 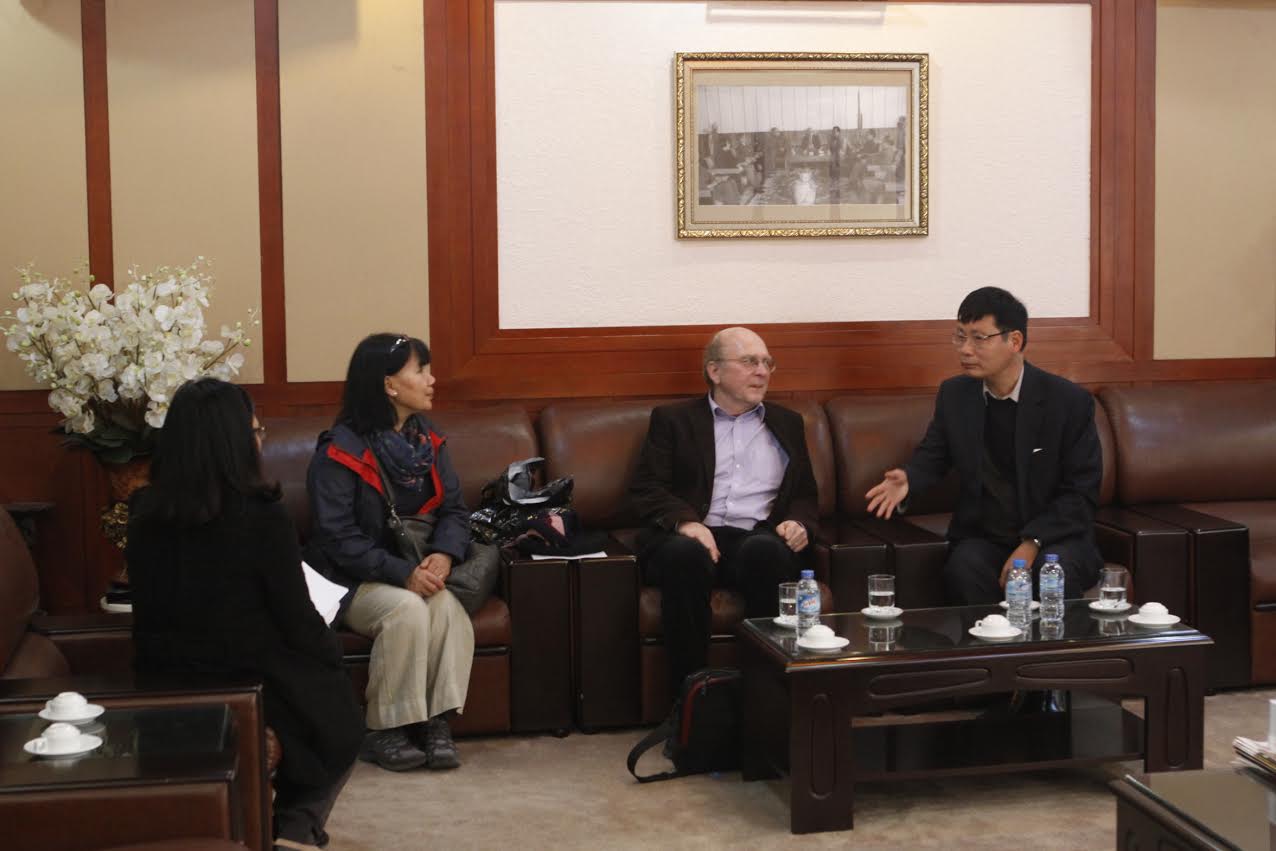 Deputy Director of the Vietnam Film Institute, Mr. Vu Nguyen Hung, and Mr. and mrs. A. Spijkers, the ambassador of teh Ivens Foundation, during their meeting in Hanoi.

Adrianus (Ad) Spijkers' career, dedicated to the farmers of Asia and Africa, spans over three decades. The Food and Agriculture Organization of the United Nations (FAO) recognized his services by according the prestigious B. R. Sen Award (2010)for his outstanding leadership in innovative interventions towards comprehensive food security in Bangladesh as the FAO Representative (2006-2011).

Ad Spijkers also served as the FAO Representative in Cambodia (1995-1999) and DR Congo (1999-2006), and since 1985 – 1995 as a programme officer in Vietnam and China (promoted there as the Deputy FAO Representative). Before joining FAO, he worked during 1970’s for the University of Nijmegen and NUFFIC (Netherlands University Foundation for International Cooperation) in the Hague. He was responsible for third-world matters, especially covering Vietnam, Cambodia and Mozambique. Earlier he worked in the field in Portugal.
After regular retirement (in 2011) Ad Spijkers has continued serving FAO under the retiree scheme in various advisory roles in Asia and Africa. This includes the assignments of the FAO Representative a.i. in Zambia (2012), Sudan (2013)and the United Arab Emirates, UAE (2014-15), where he also heads the FAO Sub-Regional   Office for the six GCC countries. His goal was to lift the level of the FAO collaboration with the UAE to new heights.

His notable achievements include, among others, the expansion of the FAO country programme in Vietnam covering 40% of the UNDP annual country budget. There he managed around twenty large projects including the first agricultural sector review done jointly with the World Bank. In China, he inspired the farmers in adopting modern methods like Integrated Pest Management, and in fighting against illegal logging in Cambodia. In DR Congo he persuaded FAO’s ‘peace boats’ to carry food through the river Congo to the victims in the conflict zones.

Ad Spijkers pioneered, with support from USAID and other partners (like IFPRI), the successful Bangladesh Country Investment Programme (CIP) for agriculture, food security and nutrition, the first in Asia,under the US Presidential Global Hunger and Food Security Initiative (Feed the Future).FAO Bangladesh also emerged as one of the biggest FAO operations in the world supporting the country through the global food, fuel and fertilizer crises, and in the fight against zoonotic diseases, floods, cyclones, and climate change challenges.

Even recently, he prompted overhauling of the FAO country operations, triggered intensive interactions with the government and partners, and launched investment plans and innovative programmes in Zambia, Sudan and the United Arab Emirates.

He lately helped the development of the Mekong Delta Plan in Vietnam with the Netherlands Cooperation, which followed his earlier initiative for the Southern Delta of Bangladesh. He is a member of the Independent Advisory Committee of Humidtropics, a new CGIAR (Consultative Group on International Agricultural Research) Programme on Integrated Systems for the Humid Tropics. He also worked in Ghana and Nigeria in the recent years in different capacities. In his relentless quest for and depth of experience in sustainable food security, natural resources management and social development, he  champions the principles of inclusive dialogue, people’s participation and building multidisciplinary team work, with which he continues till today scaling up FAO country and regional operations.

As a retiree consultant Ad Spijkers is based in Nijmegen, the Netherlands and Hanoi, Vietnam. He was born in the sandy soils of the southern Netherlands in 1949. He holds an M.A in Development Studies, Agriculture and Rural Development from the Institute of Social Studies (ISS), The Hague. He is married and blessed with two grown-up children.